Cherry eye disorder causes red and bloodshot eyes in French bulldogs. Every dog has a third eyelid, which is a clear membrane that cleans and delivers tears to the eye. Cherry eye develops when the lower eyelid is wounded or infected. As a result, the eyes become dry, bloodshot, and red.

What Causes Red Eyes in Your French Bulldog?

Allergic reactions in your French Bulldog eyes can result in bloodshot eyes, profuse crying, and pawing at the eyes.

Allergies are also characterized by itching, drainage, and crusty skin around the eyes.

Pollen is the most prevalent allergen, although French Bulldogs can also be allergic to dust, mites, fleas, and foods. All of this can cause your French Bulldog’s eyes to turn red.

Cataracts cause your French Bulldog’s eyes to grow hazy and inflamed. Cataracts do not form in French bulldogs until they are 6 to 7 years old. Therefore early identification is critical.

Glaucoma is a disorder that causes a rise in intraocular pressure, which can harm the visual nerve. A red eye is one of the signs of this condition, which can lead to blindness.

Eye pain, red eyes owing to blood in the vessels, squinting because it hurts to gaze, and excessive tearing are all symptoms of a corneal ulcer in a French Bulldog.

Trauma from a foreign material or a scratch from another dog or cat is the most common cause of corneal ulcers in Frenchies.

Entropion occurs when the eyelid of a French Bulldog rolls inward toward the cornea, causing lash damage and inflammation. Entropion can cause red eyes, as well as excessive tearing and sensitivity.

Distichiasis is a disorder in which additional eyelashes on the eyelid’s edge rub against the cornea. A French Bulldog suffering from distichiasis will have itchy, red eyes and may squint because opening them is difficult.

Uveitis is an inflammation of the uvea, the central layer of the eye. Uveitis in a French Bulldog can cause red eyes and other symptoms like excessive tears, pain, and light sensitivity.

Conjunctivitis is an inflammation of the conjunctiva, a thin membrane that lines the interior of the eyelids and coats the eyeball. Conjunctivitis in a French Bulldog can cause red eyes, discharge, and crusting on the eyelashes.

Your French Bulldog will have red, puffy eyes with clear discharge and even weep if he has cherry eyes.

Cherry eye develops when the third eyelid’s tear gland swells and protrudes beneath the nictitating membrane.

Cherry eye can be treated, but it will likely reoccur in particular French Bulldogs. It could necessitate surgical intervention.

To avoid problems such as eyelid abnormalities and cornea damage, a cherry eye must be surgically repaired.

Because of a lack of tears, your French Bulldog’s eyes will be red and inflamed if it has a dry eye condition.

With this condition, a French Bulldog will blink constantly and may develop a secondary bacterial or yeast infection.

Your Frenchie has dry eyes because he is not making enough tears to keep his eyes wet.

This disorder can have various underlying reasons, ranging from allergies and infections to hereditary issues and the environment.

The eyes will begin producing a thick, murky yellow-to-green discharge, and your dog will exhibit excessive squinting or blinking.

Dry eyes are not dangerous, but they might be uncomfortable for your Frenchie.

Suppose it is caused to an infection or illness. Your veterinarian will likely prescribe an antibiotic to clear up the infection and eliminate his red eyes.

If your Frenchie has allergies, environmental factors, or genetic eye problems. In that case, he or she will most likely require daily eye drops to prevent symptoms from recurring.

When a Frenchie has a fever, they will also have painful and red eyes. Taking your French Bulldog’s temperature is the simplest way to check for a fever. Learn more about accomplishing this and what fever symptoms to watch for here.

Make an appointment with your veterinarian right away if your French Bulldog exhibits one or more of these symptoms.

These are some of the most prevalent French Bulldog eye complaints.

If you are concerned about your Frenchie’s eyes, don’t hesitate to contact your veterinarian. They will be able to diagnose the issue and recommend the best remedy.

How to Protect and Prevent French Bulldogs from Red Eyes

Protecting, preventing, and reducing French Bulldog eye problems is not only a wise decision but also the healthiest option for your French Bulldog.

Here are a few things you can do to decrease or avoid red eyes in your French Bulldog:

The food of a French Bulldog should be complete, well-balanced, and suit their nutritional needs throughout their lives.

Proper nutrition is essential for French Bulldogs because it can aid prevent or lessen the risk of eye disorders throughout their lives.

Look for a supplement containing DHA and EPA, the two primary omega-3 fatty acids in the retina.

Your veterinarian should examine your French Bulldog’s eyes at least once a year or more frequently if necessary.

The earlier these diseases are diagnosed, your veterinarian will have treatment options.

Most people wonder how often their French Bulldog’s eyes should be cleaned. You should get their eyes cleaned regularly, especially if they have a lot of discharge.

Gently wipe the area around the eyes with a warm, wet towel. Remove any crusted regions and allow the site to dry naturally.

Simply wiping your Frenchie’s tear stains can aid in the prevention of infection and eye problems.

Tear stains are not only ugly, but they can also be a breeding ground for bacteria.

Bacteria can enter your Frenchie’s eyes through routine activities like grooming or simply being his exuberant self and playing, resulting in eye infections.

Weekly, use a sterilized eye wash or eye wash pads to clean your Frenchie’s tear streaks.

Pet-specific brands can be available in pet stores or online; however, using a particular pet brand is optional. You can use a sterilized eyewash from your local drugstore, but avoid ones with extra chemical chemicals.

A Frenchie can be hurt by various items, including splinters, sharp edges, and even other pets.

Take the appropriate precautions to protect your French Bulldogs’ eyes from these forms of injury.

This could involve employing a Frenchie eye guard when playing with other dogs and keeping dangerous items out of reach.

When bathing or grooming your Frenchie, pay special care to the area around his head. Chemicals in shampoos and other grooming products can cause irritation, inflammation, infections, and even more serious problems like corneal ulcers in Frenchies, who have naturally sensitive eyes.

If you take your Frenchie to a groomer, make sure to voice your concerns. Not all groomers are as cautious as they should be, and they may be unaware of how sensitive a Frenchie’s eyes can be.

Also Read: What is a Platinum French Bulldog?

Cherry eye can be treated in a variety of ways, both medically and non-surgically.

The most effective non-surgical treatment comprises simple eye massage techniques that your veterinarian can teach you.

It worked by combining eye drops, a warm moist towel, and rubbing his eye with a technique demonstrated by your veterinarian. After a few weeks, he will feel much better.

However, while this strategy helps minimize symptoms and reoccurring discomfort, your French Bulldog’s condition will still need to be monitored by the vet.

The most effective surgical treatment is known as an attachment technique. The fleshy section of the membrane is anchored to more strong tissue in the lower corner of the eye socket, preventing the cherry eye from returning.

This procedure is a long-term treatment, and your Frenchie is unlikely to develop cherry eye again.

How to Get Something Out of Your Frenchie’s Eyes

French Bulldogs, like any other breed of dog, will acquire something in their eyes from time to time.

If something is lodged in their eyes, you can try to remove it at home if you are comfortable doing so.

To begin, attempt to flush the thing with water. If it doesn’t work, you can try dog eye drops (never use human eye drops). Make sure to thoroughly wash your hands before proceeding.

Don’t try to remove something trapped deep in your French Bulldog’s eyes on your own. This is dangerous and should only be done by a veterinarian. They can carefully remove the thing without causing any extra damage.

When Should I Take My French Bulldog To The Vet?

If your French Bulldog’s eyes are red, take it to the vet right away! Certain disorders affecting French Bulldogs’ eyes can be uncomfortable or even fatal if not handled.

Frenchies also have small tear ducts, which can cause excessive tearing or wetting. Suppose your French Bulldog has difficulty opening its eyes or appears uncomfortable when trying to open them. In that case, you should take them to the vet immediately.

Several hereditary abnormalities that can damage the eyes of French Bulldogs are bred into the breed. They are also susceptible to some types of eye infections.

Many of these illnesses are treatable if detected early. A yearly eye test for a French Bulldog is recommended to ensure no abnormalities.

Take action as soon as your Frenchie’s eyes turn crimson. Allergies or other sorts of infections can also cause your French Bulldog’s eyes to become red and inflamed. 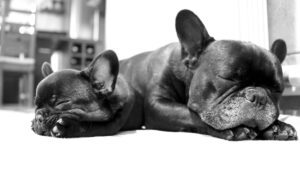 How Many Puppies Do French Bulldogs Typically Have in a Litter? 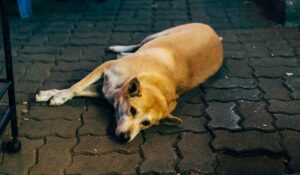 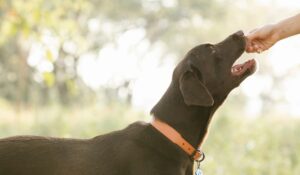 Are Chicken Nuggets Safe for Dogs?